Every year since its founding, the Toronto-based Polish Orphans Charity has been providing support to artistically talented orphans in Poland. Here are the Scholarships presentations in 2018:

Radom: Scholarships founded by Dr. Richarda D. Russ, the founder and president of Polish Orphans Charity in Canada, were awarded in the city of Radom on October 25th, 2018 - 20 underprivileged children received our Art Found certificates ($1,000 CAD each) during an official ceremony organized by our Board Member and representative in Poland, Mr. Krzysztof Gajewski in presence of the Ambassador of Canada and the mayor of Radom...

Warsaw: 20 scholarships founded by Polish Orphans Charity in Canada ($1,000 CAD each) for orphans and underprivileged children were awarded in Warsaw on October 18, 2018. The official ceremony was organized and held by our Board Member and representative in Poland, Mrs. Edyta Krasowska in presence of the Ambassador of Canada and other city officials...

The Toronto-based Polish Orphans Charity has been providing support to artistically talented orphans in Poland. Here are the Scholarships presentations in 2017:

Radom: scholarships were awarded in Radom... 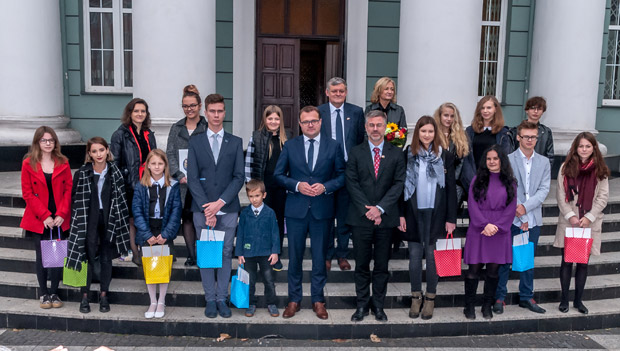 Warsaw: scholarships were awarded in Warsaw... 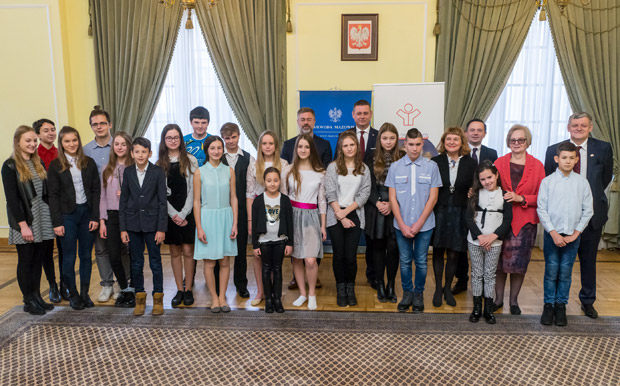 Every year since its founding, the Toronto-based Polish Orphans Charity has been providing support to artistically talented orphans in Poland. Here are the Scholarships presentations in 2015: 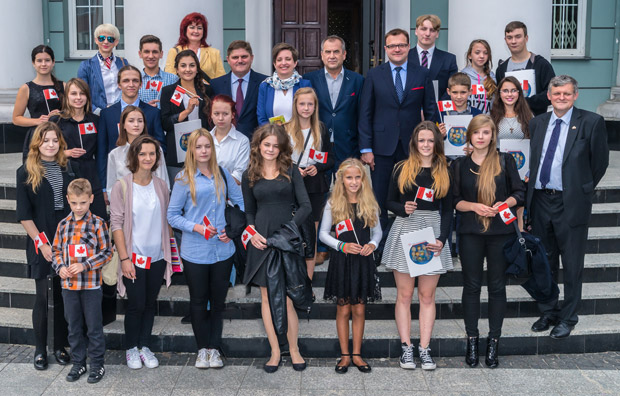 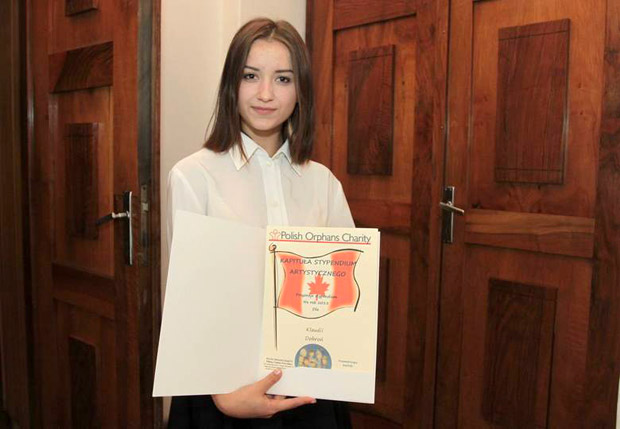 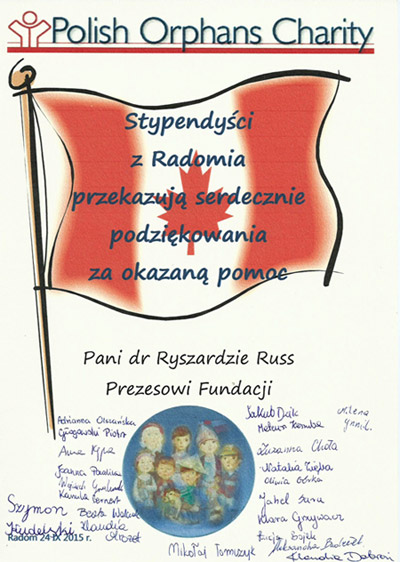 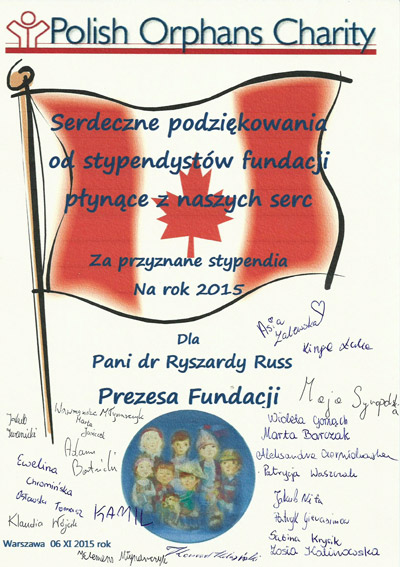 Every year since its founding, the Toronto-based Polish Orphans Charity has been providing support to artistically talented orphans in Poland. Here are the Scholarships presentations in 2014:

Mazovia: 20 scholarships were awarded in Warsaw at the Fryderyk Chopin Museum on October 24, 2014. It was a very unique ceremony, as our special guests of honour were: wife of Governor General of Canada, Her Excellency Sharon Johnston and wife of President of Poland, First Lady Anna Komorowska. Scholarships were awarded by POC Vice President, Michael Wojnarowicz. Also among other special guests were: the representative of the Canadian Embassy in Poland, Aleksander Fieglar, Governor of Mazovia, Jacek Kozlowski and Mayor of Warsaw-Wawer, Jolanta Koczorowska. After all the scholarships were awarded, there was a short talent show given by the scholarship recipients. Our special thanks to POC Board Member and representative in Poland, Krzysztof Gajewski who organized and hosted the ceremony, making it a very memorable event for everyone. 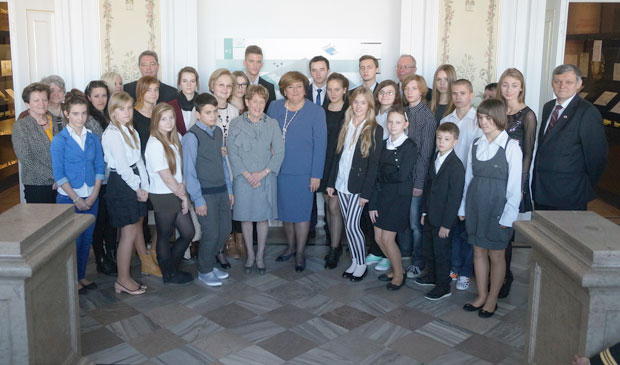 News - Official website of The Governor General of Canada Thank you note from Her Excellency Mrs. Sharon Johnston after the ceremony in Warsaw


Radom: 24 scholarships were awarded on October 3rd, 2014 in the presence of Aleksander Fieglar representing the Canadian Embassy in Poland along with other officials and members of government from Mazovia and the city of Radom: Radosław Witkowski, Leszek Ruszczyk, Dariusz Wójcik, Rafał Czajkowski and Piotr Szprendałowicz. The ceremony was hosted by POC Board Member in Poland, Krzysztof Gajewski. It was the 8th annual scholarship award ceremony in Radom and another success benefiting underprivileged children who are also particularly artistically talented. It was also an honour that the ceremony was held under official patronage of First Lady Anna Komorowska, wife of the President of Poland. 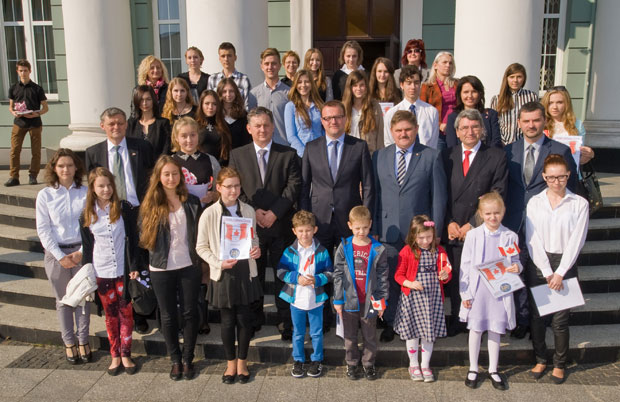 More info and photos in the link below (in Polish):

Here are the Scholarships presentations in 2013: 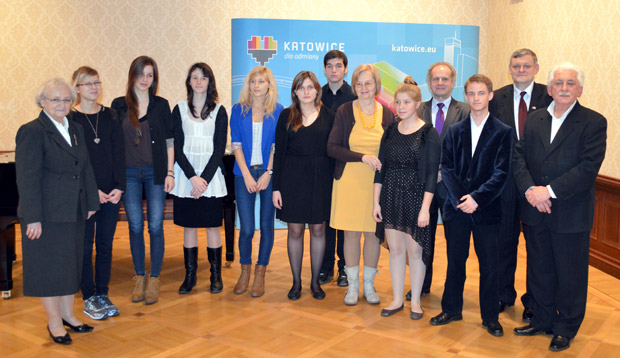 Radom: 14 scholarships were awarded on September 3, 2013 in the presence of Vice President of POC Michael Wojnarowicz, Board Member in Poland Krzysztof Gajewski, designated representative from the Canadian Embassy in Poland Pamela Isfeld, former CBC journalist Jerzy Jastrzebowski, and other officials from the city of Radom. 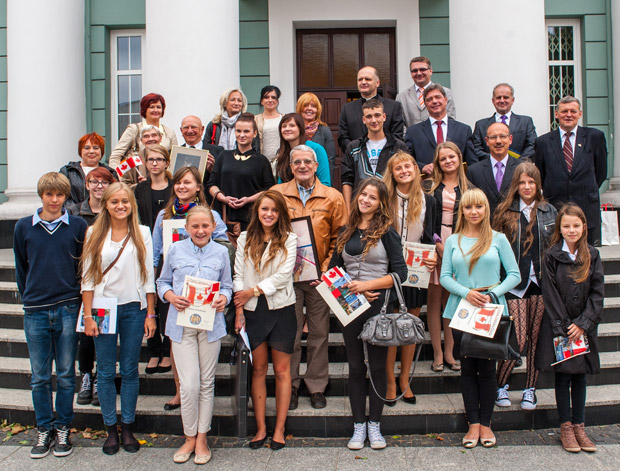 Mazovia: 20 Scholarships were awarded in Warsaw on September 24, 2013 (see next photo) in the presence of the Ambassador of Canada for Poland, Aleksandra Bugailiskis (subsequent photo), POC Board Member in Poland Krzysztof Gajewski, along with other officials and members of local government. Scholarships were awarded in memory of Irena Cebo-Kozik. 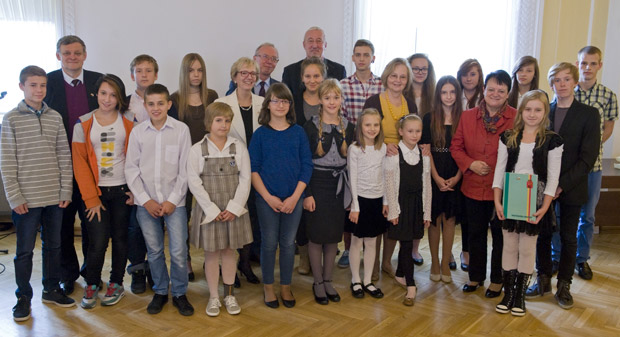 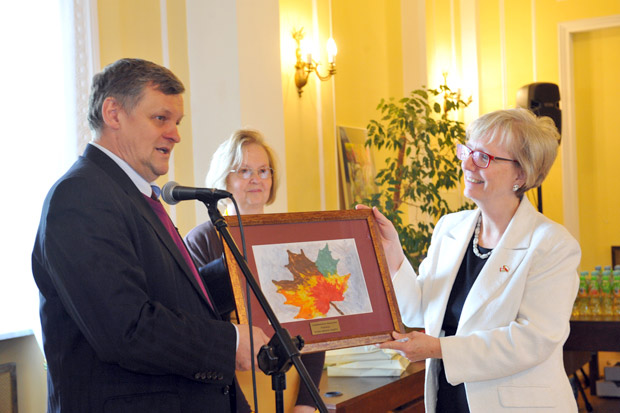 To view photographs from these and similar such events throughout Poland, please click below to view the gallaries presented on our sister site, Polish Orphans Charity in Poland, polishorphans.pl

Here are some additional links, articles and photos from the ceremony in the City Hall of Radom in Polish:

The Toronto-based Polish Orphans Charity's main aim, since its founding in 2000, has been to provide support to artistically talented orphans in Poland. Since then well over 150 children in Poland have received scholarships and the organization has also funded over 60 playgrounds at various children’s homes. In this respect, here is what we accomplished in 2012:

Starting in Radom on July 3, 2012, 24 scholarships awarded in the presence of Chris Korwin–Kuczynski, Member of the Board of the Polish Orphans Charity in Toronto, along with Jerzy Jastrzebowski, former CBC journalist, Krzysztof Gajewski and Edyta Krasowska, Members of the Boards in Poland, officials from the city of Radom, and designated representative from the Canadian Embassy in Poland, Ewa Cichocka.

Subsequently, 15 Scholarships were awarded in Kielce, Poland on September 17, 2012.

To view photographs from these and similar such events throughout Poland, please click below to view the gallaries presented on our sister site, Polish Orphans Charity in Poland, polishorphans.pl

Here are some additional links to various media reports within Poland regarding our scholarship activities:

Here is what we accomplished in 2011: 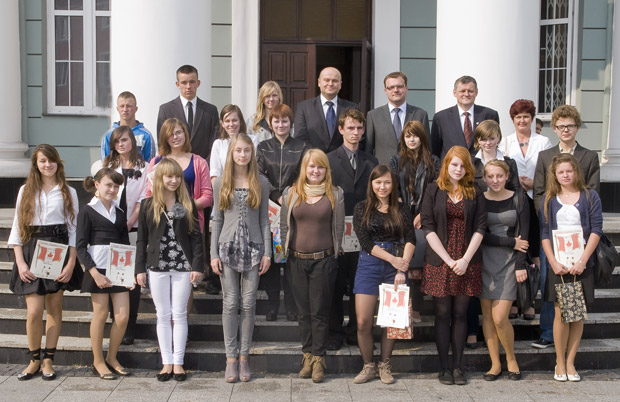 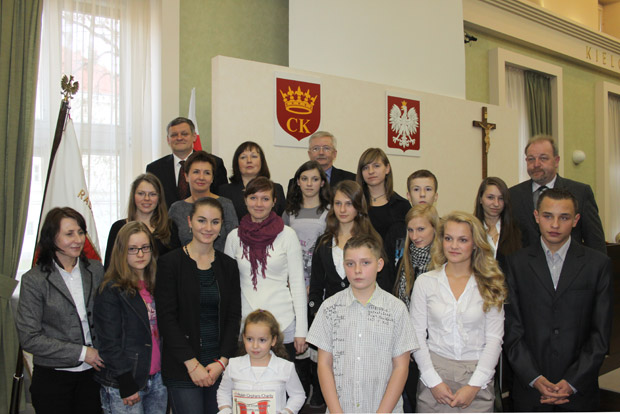 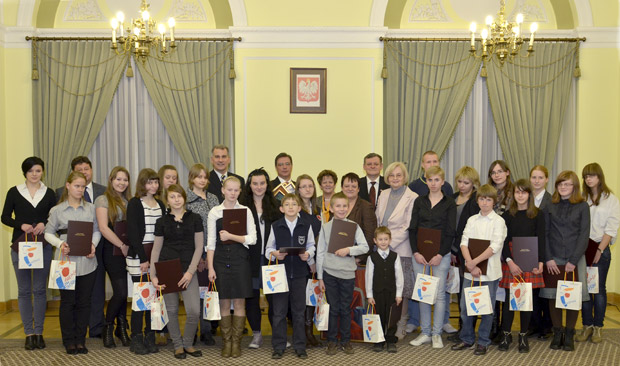 November 28, 2011... 22 scholarships funded by the Toronto-based Polish Orphans Charity were awarded to artistically talented children from the Mazovia voyvodship. The awards were presented by Ambassador Daniel Costello and Deputy Voiviod Dariusz Piatek. 14 of the scholarship recipients come from children’s homes or underprivileged families in Warsaw. The youngest was seven years old, the eldest - 18. These non-monetary scholarships will be used to acquire musical instruments, artist’s materials or other supplies which will help these artistically talented children pursue their passions. Each scholarship was equivalent to CAD$1,000.00. 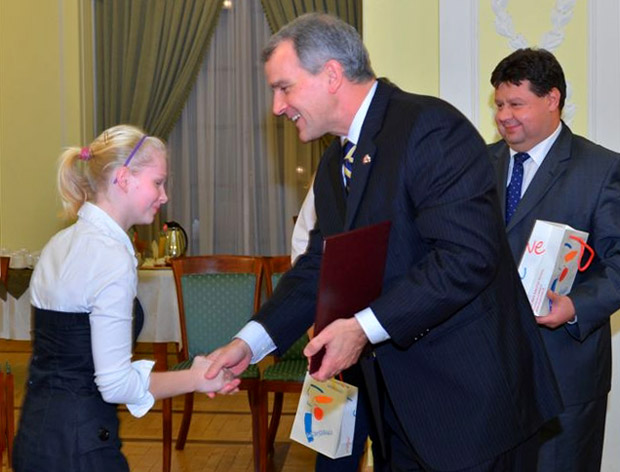 Polish Orphans Charity, on October 15, 2010, awarded 51 scholarships for artistically talented children. The annual ceremony took place in the City of Radom, Poland. Each scholarship was equivalent to CAD$1,000.00.

The following is an English translation of the speech given, originally in the Polish language, by Mr. Krzysztof Gajewski at the awards cermony. Mr. Gajewski is a member of the Advisory Board of Polish Orphans Charity, member of the Scholarship Chapter and organizer of the awards ceremony in Radom, Poland:
(see related video here)

Today is a very special day for our wonderful recipients of Polish Orphans Charity scholarships. It’s a celebration of patriotism - a day to cherish Polish Canadians who care about our talented children in Poland. (Continued below...) 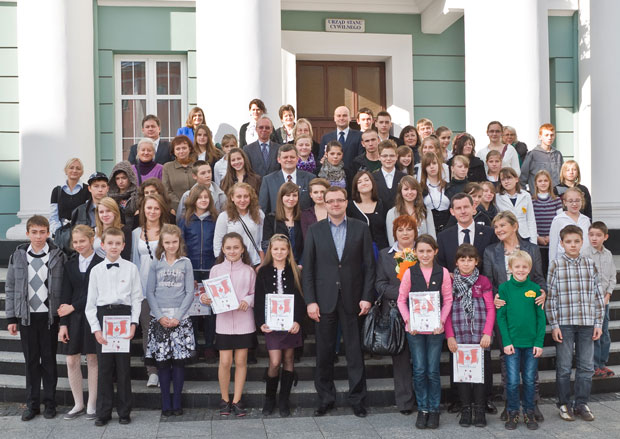 On this occasion, I would like to welcome our special guests: I welcome all participants who came here today to join our ceremony: friends, guardians and families of our recipients, as well as the media.

Last but not least, I welcome YOU our wonderful, talented scholarship recipients. There is no doubt that YOU are the most important in this room today.

There are moments in life that are worth waiting for. It is worth waiting for a given chance to help others. On behalf Polish Orphans Charity in Toronto Canada, we are giving you today, our dear recipients, nothing more than an opportunity to explore your gifts and talents. Whether you’re going to take that chance seriously – it will depend on you and only you!

The first Radom Scholarship is being awarded in memory of DOROTA and ROMAN FURMAN, and the first Mazovian Scholarship is being awarded in memory of ANNA and EDWIN CICHON. Both of these couples spent their lives in Canada, but have never forgotten about their homeland, Poland. They dedicated a part of their estate to support Polish orphans and children in need. It would be customary to honour our donors with a minute of silence, but I have another suggestion – let’s honour them with an applause, which will reach them in heaven right from this room in Radom from all children of Mazovia.

I am very pleased to share some other good news today. What makes us very happy (me personally, and all members of the P.O.C. foundation) is the fact that, during this year, we have an opportunity to expand our Scholarship Program in other cities in Poland. Therefore, we’ve been honoured with the presence of representatives of Kielce and Warsaw, who join our ceremony today to see first-handedly our development of the scholarship program in Radom.

Lastly, I would like to mention that just two days ago, I presented my Masters thesis to my professor at the University of Warsaw, in which I wrote about Polish Orphans Charity and its activities in Poland between 2003 and 2010. I need to stress that I dedicated my work to Dr. Richarda Russ, the founder of the charity, a wonderful woman, who has placed her trust in me and vice-versa. Without her, we wouldn’t be here today.

God bless all the children and all the good people in Poland and Canada.


The following text (in Polish) is from a media website in Poland.
(Source link: www.tygodnikradomski.pl/artykul/radom/1734). For more media articles and video, click link below.
Kanadyjskie Stypendia Wręczone
- 2010-10-16 10:58:00, autor: Klaudia Kornacka